Remember to use your visual timer! We recommend the inventor’s iOS and Android apps — just search for “Time Timer” in the app store.

In this exercise, you’ll study a poster design and analyse how it uses the visual principles discussed in the previous assignment.

Pictured below is a poster by the twentieth-century Swiss graphic designer Josef Müller-Brockmann. 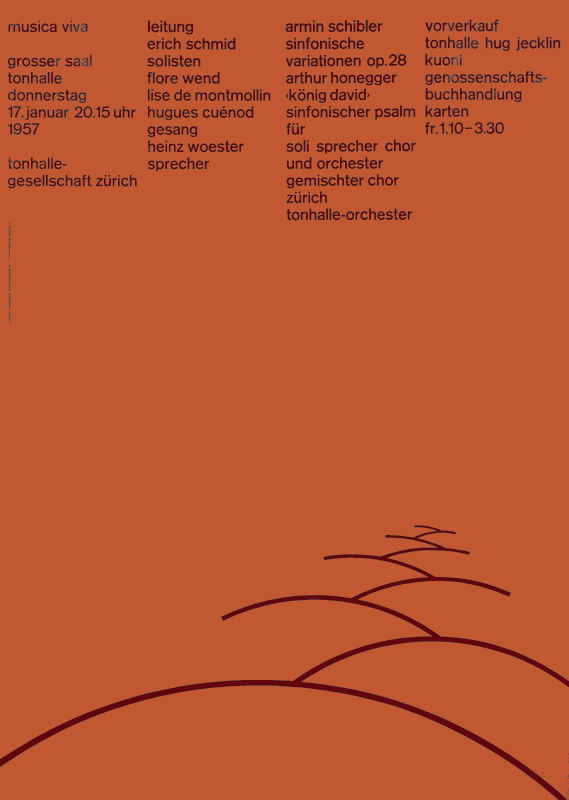 Get feedback on your work

Join our free Slack workspace   to discuss your assignment with other members of the Baseline community.

Thanks for supporting Baseline!

Study it carefully, and write down how you think he uses the visual principles introduced in the previous lesson. Here they are again:

Once you’ve completed your work on this assignment, take a few minutes to review the example solution below.

In Müller-Brockmann’s poster, visual principles are at work in the following ways:

Arguably Müller-Brockmann doesn’t create clear hierarchy within this design, and this is likely intentional. By creating two areas of roughly equal visual weight (top and bottom), with no clear order, the designer is likely deliberately creating a sense of tension.

Our eye wants to begin in the top-left, because that’s where it’s used to starting on a page, but we are equally drawn to the bottom-right, with the graphic leading the eye back up the page.

Here are three of Müller-Brockmann’s other posters, where he uses hierarchy in a more conventional way, with larger text rising above other elements in the hierarchy. Remember, in a simple sense, hierarchy means “what your eye sees first”. 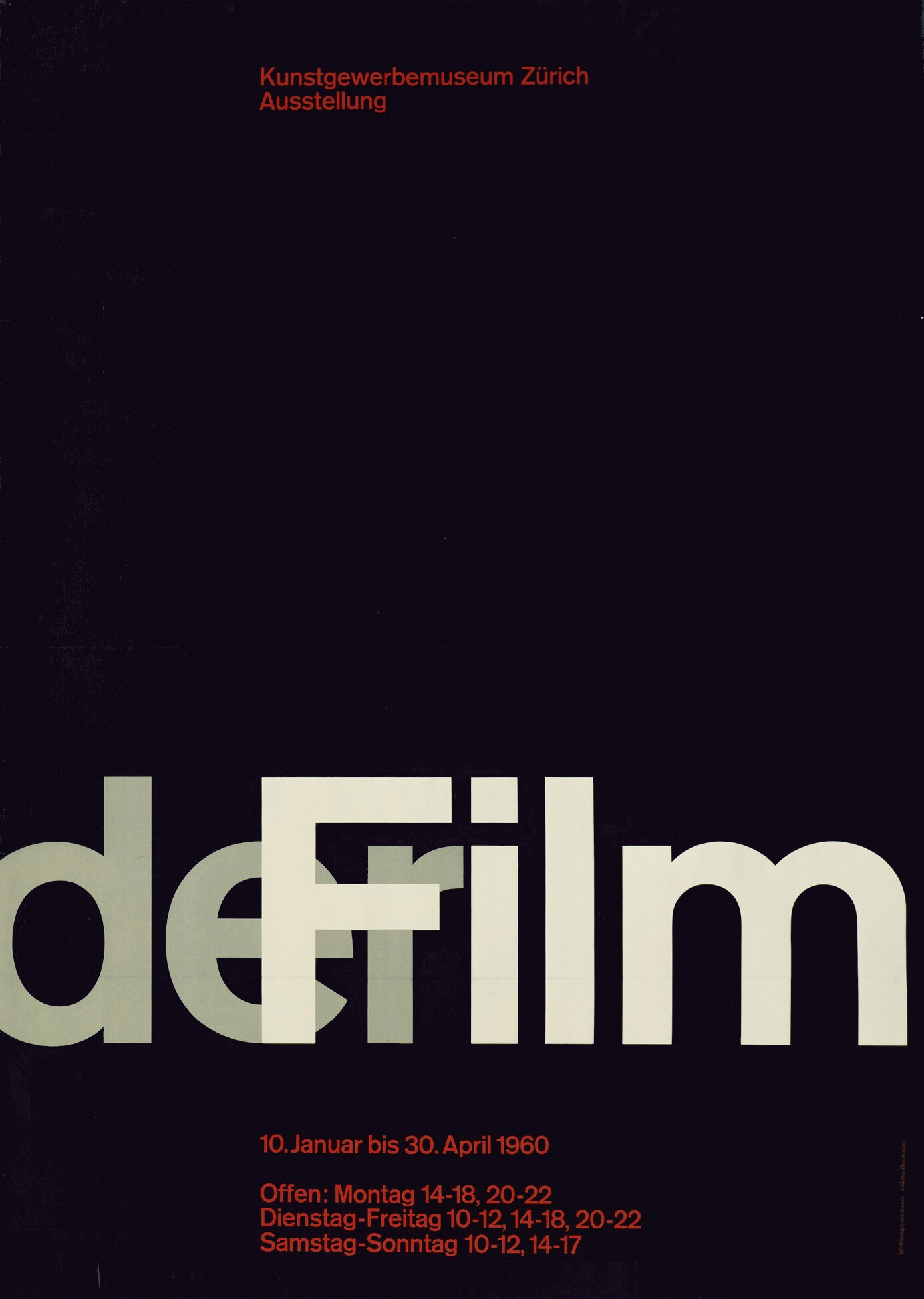 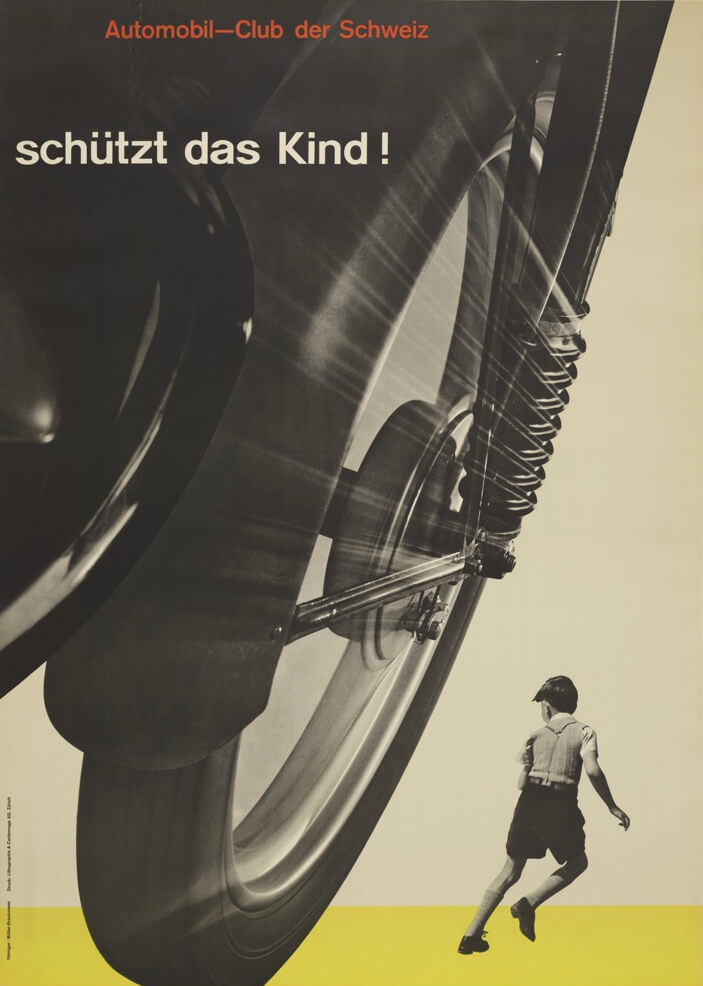 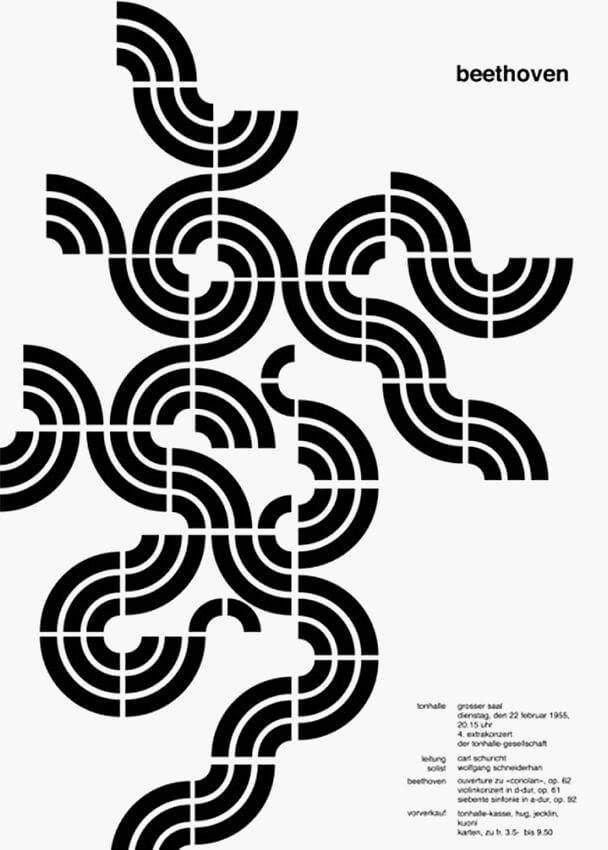 Müller-Brockmann’s use of spacing in this design is generous and sophisticated. Increments of spacing between the curved lines at the bottom create a perspective effect, contrasting with the regularity of line and column spacing in the area of text. The large area of space in the centre also supports the design by directing our attention to the text and to the illustration.

Alignment is used in the text in two key ways:

These are shown below. 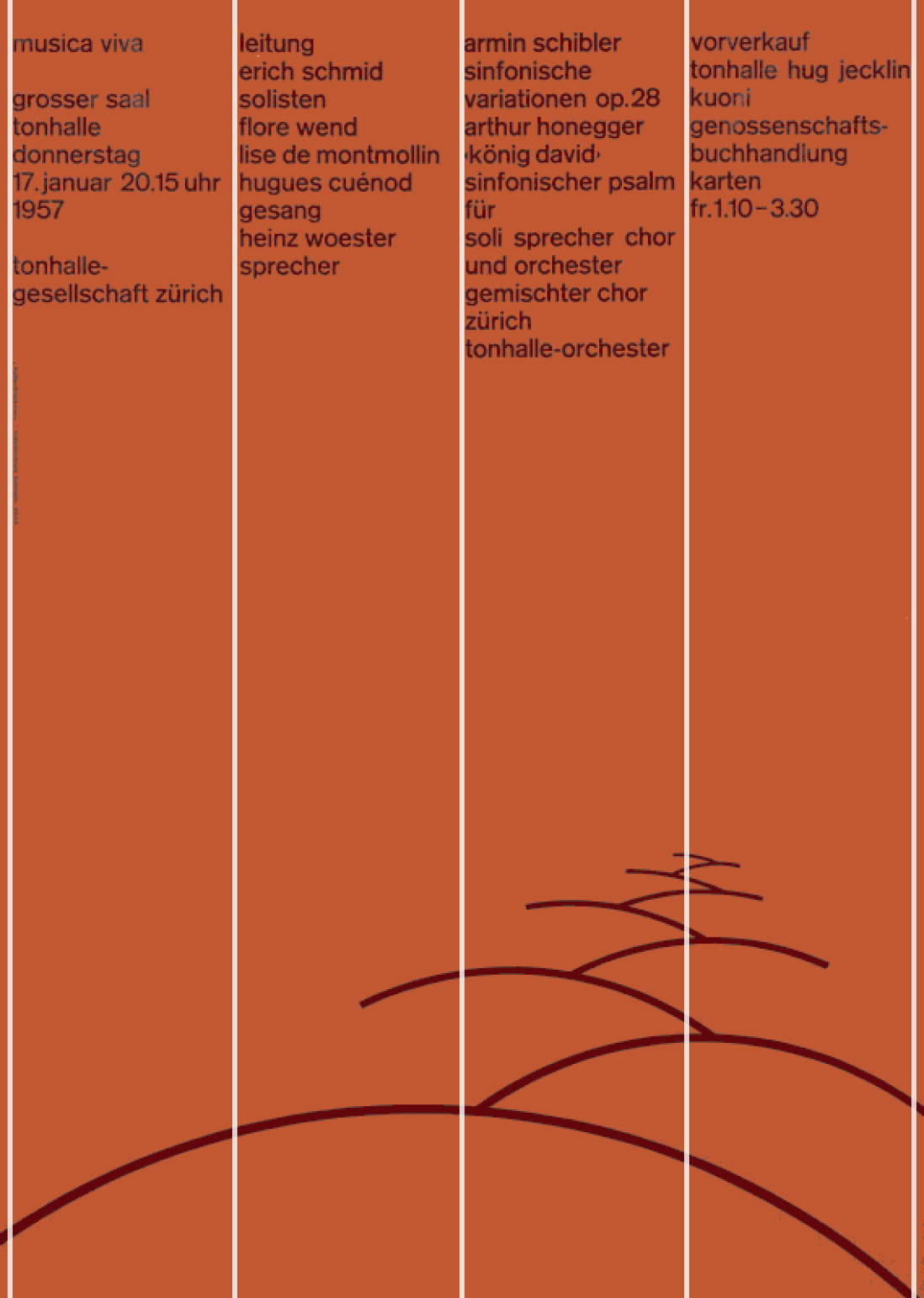 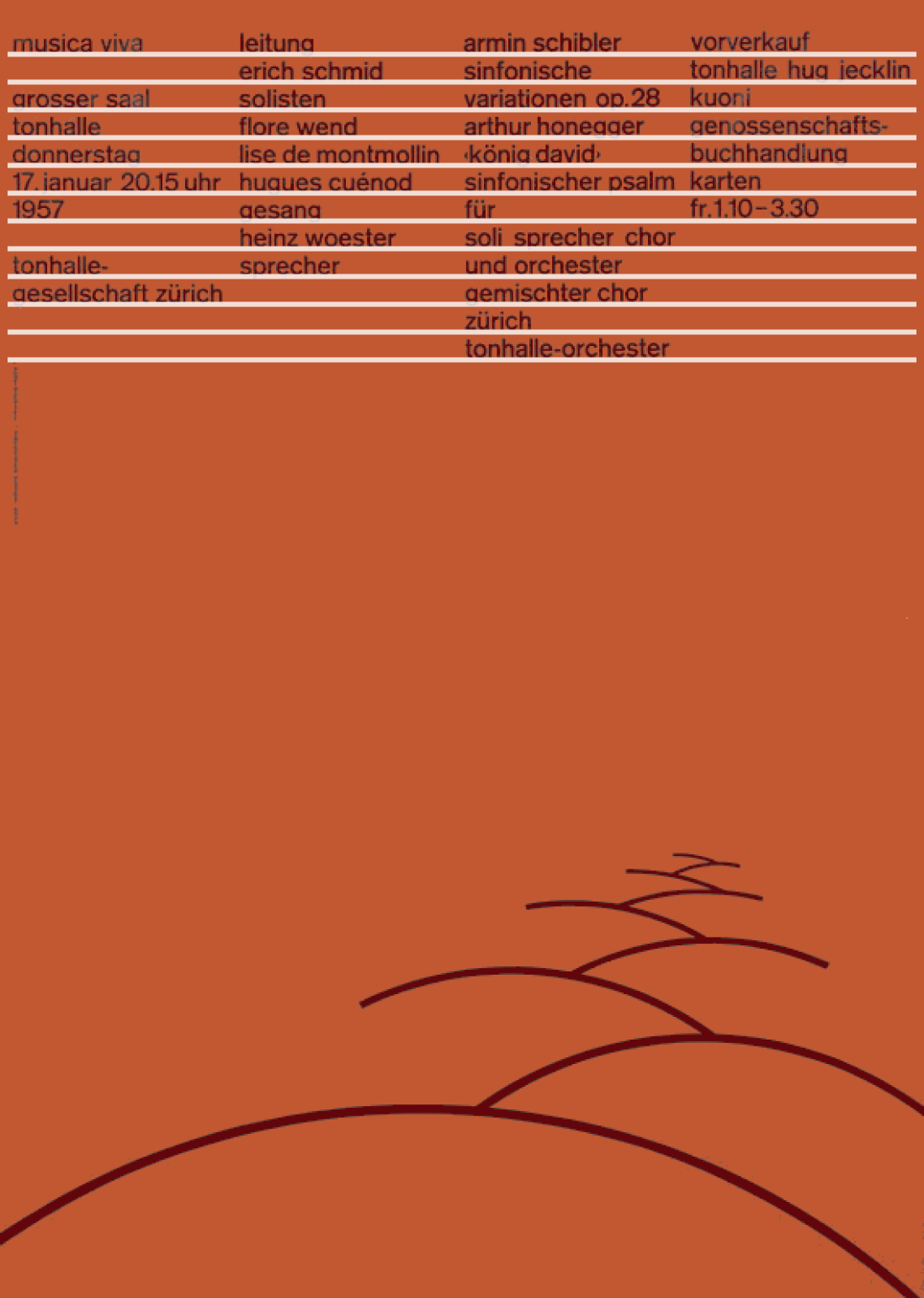 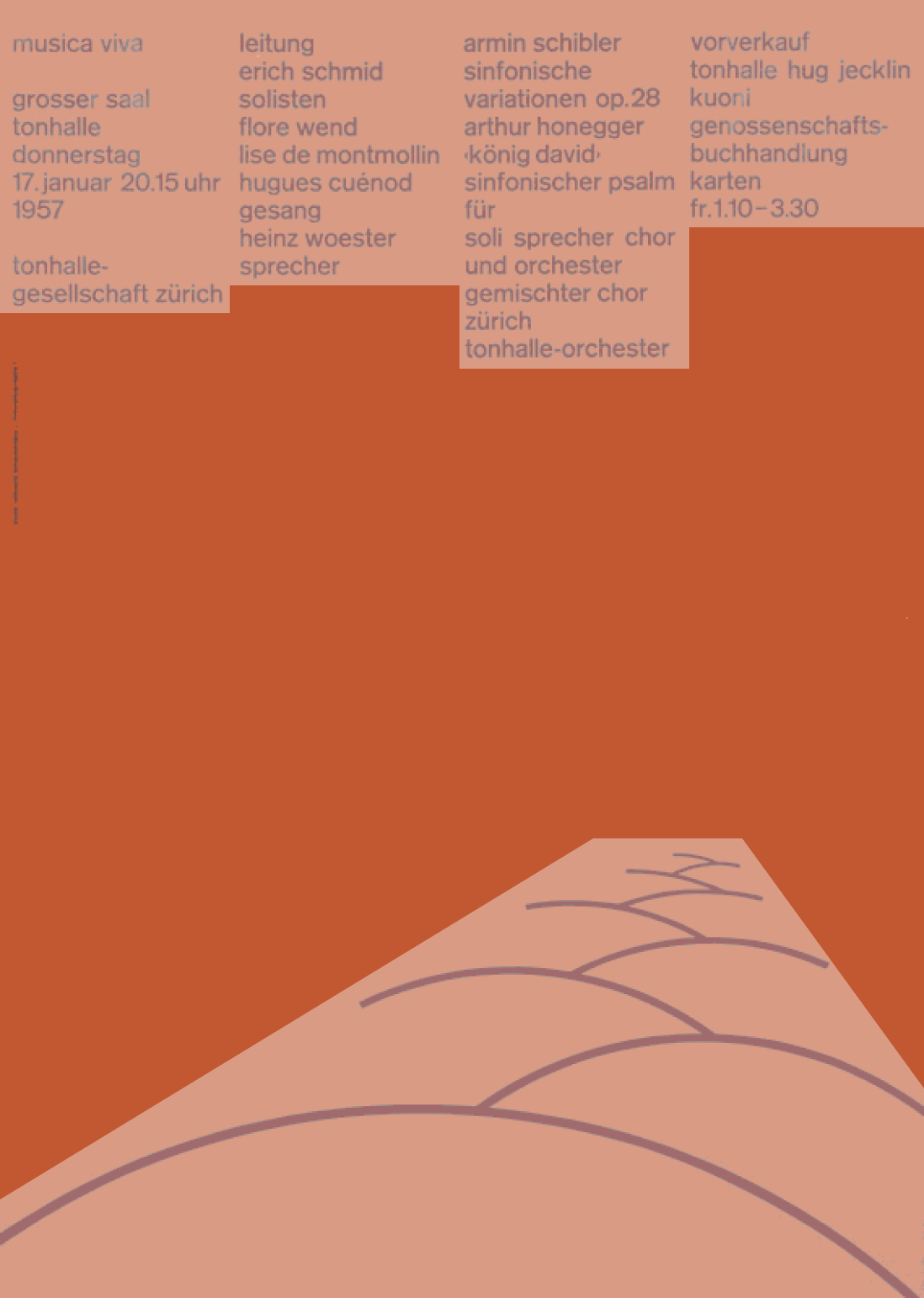 These can be seen at a few different levels:

There is very little content in this design, so there isn’t much need for pacing. Nevertheless, breaking the text into four columns does introduce some management of pace, by allowing us to read and conceptualise the information in four chunks.

Through this exercise, hopefully you’ve seen how even a very simple or minimalistic design still relies heavily on visual principles. Next, it’s time for you to apply them in a design of your own!