How to Combine Fonts 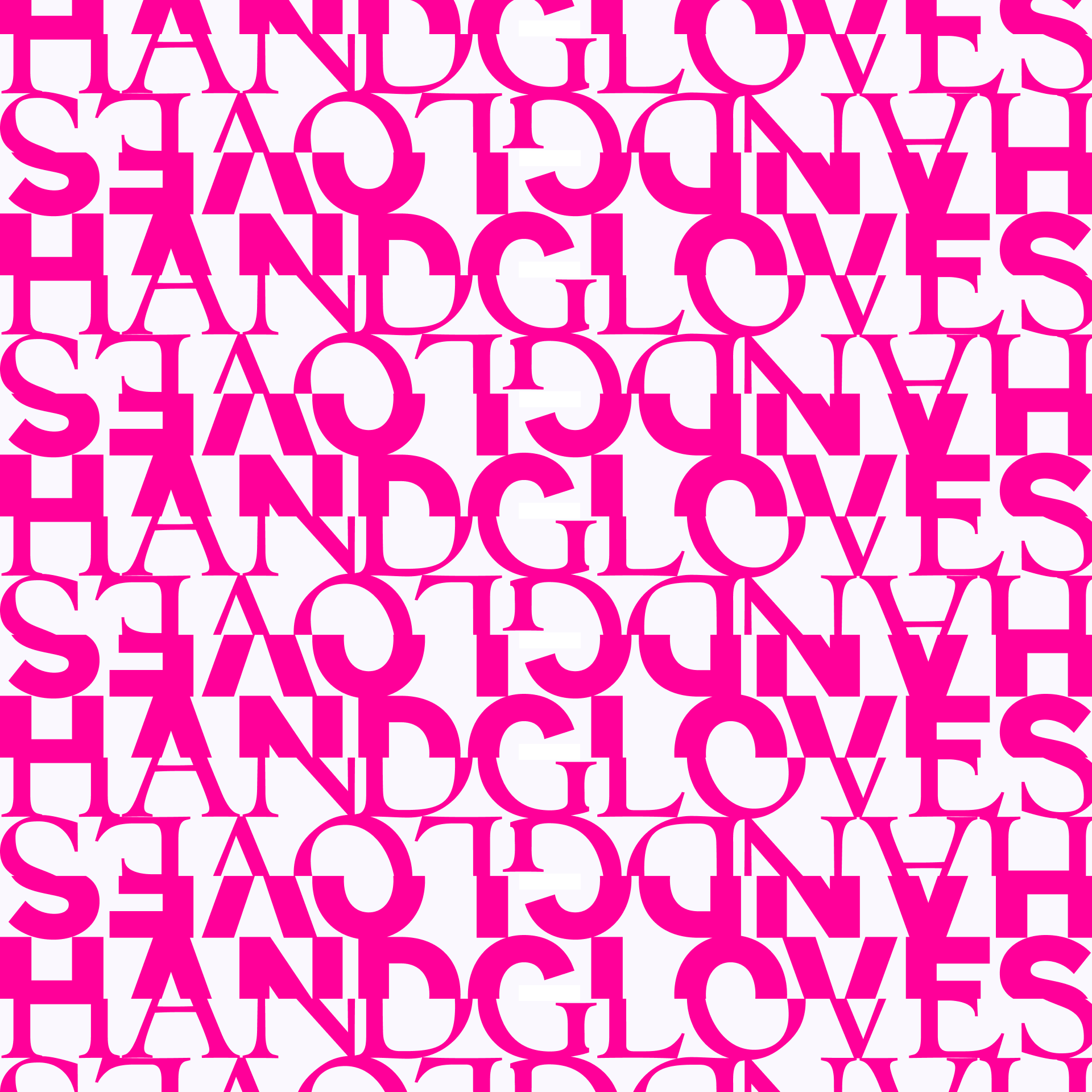 There’s a lot to say about how to combine fonts. This assignment offers some key practical principles which can help you to start pairing fonts with confidence. Remember, most design projects can be executed using just one or two typefaces. Get lots of practice pairing two fonts before trying to combine three or more!

It’s always best to change one variable at a time — so start by choosing one typeface using the method we covered a few assignments ago.

Once you’ve picked that one, you just have to look for a second font to pair it with. After you’ve explored possible combinations with that first choice, you can start the process again with a different one.

Working in this way makes the process more structured and manageable.

Instead, pair serifs with sans-serifs, and vice versa

Pairing sans-serif headings with a serif for body text, and vice versa, is a tried and tested path to happy font combinations.

For maximum contrast, the two fonts should have some or all of the following:

To achieve clear contrast, it will often be best to choose a display serif and pair it with a sans-serif or vice versa. Here are some examples: 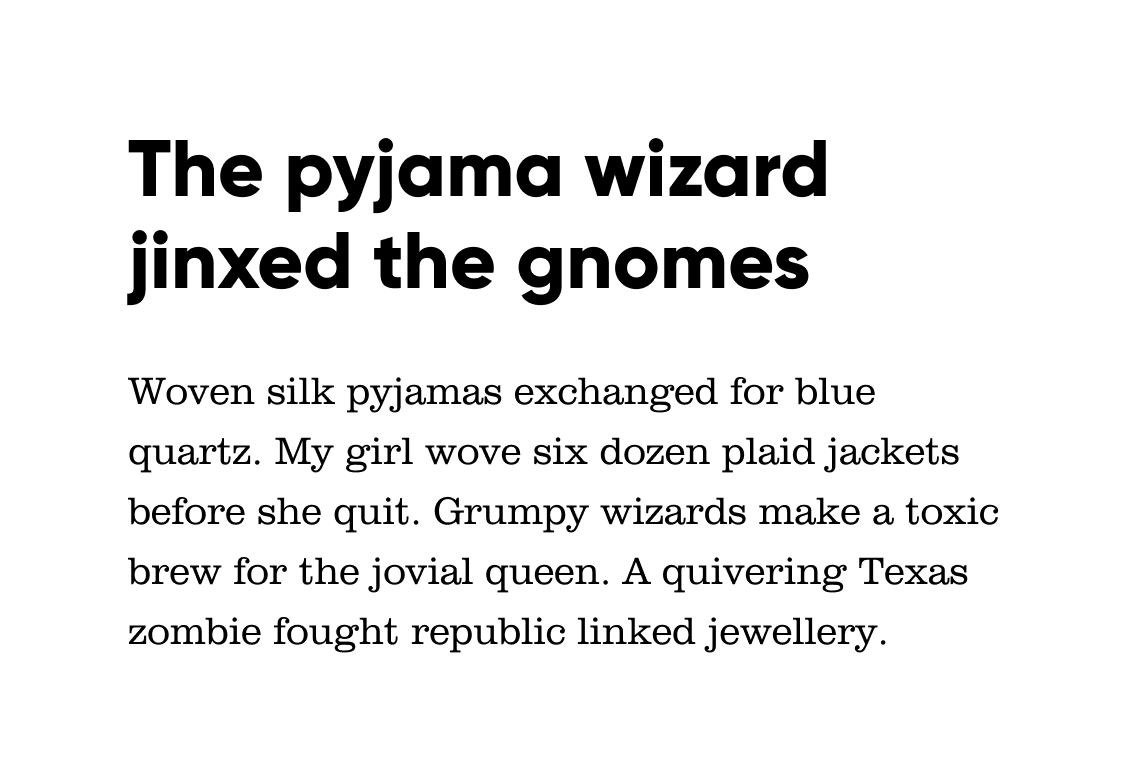 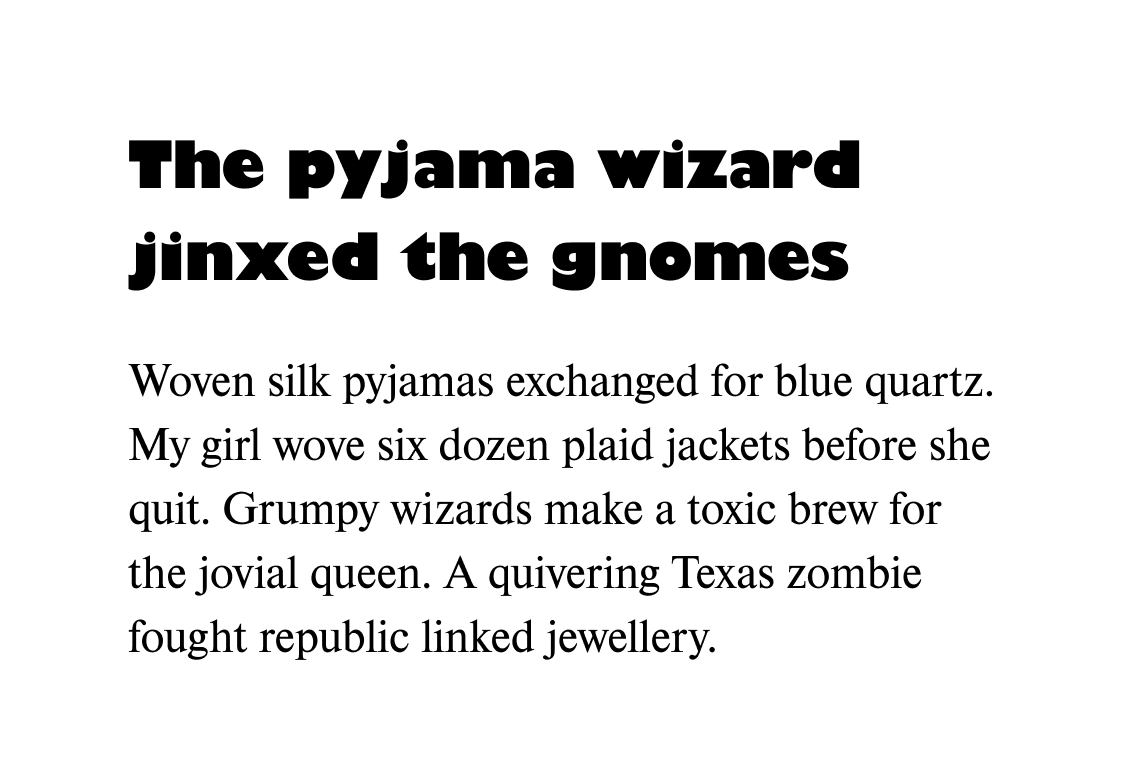 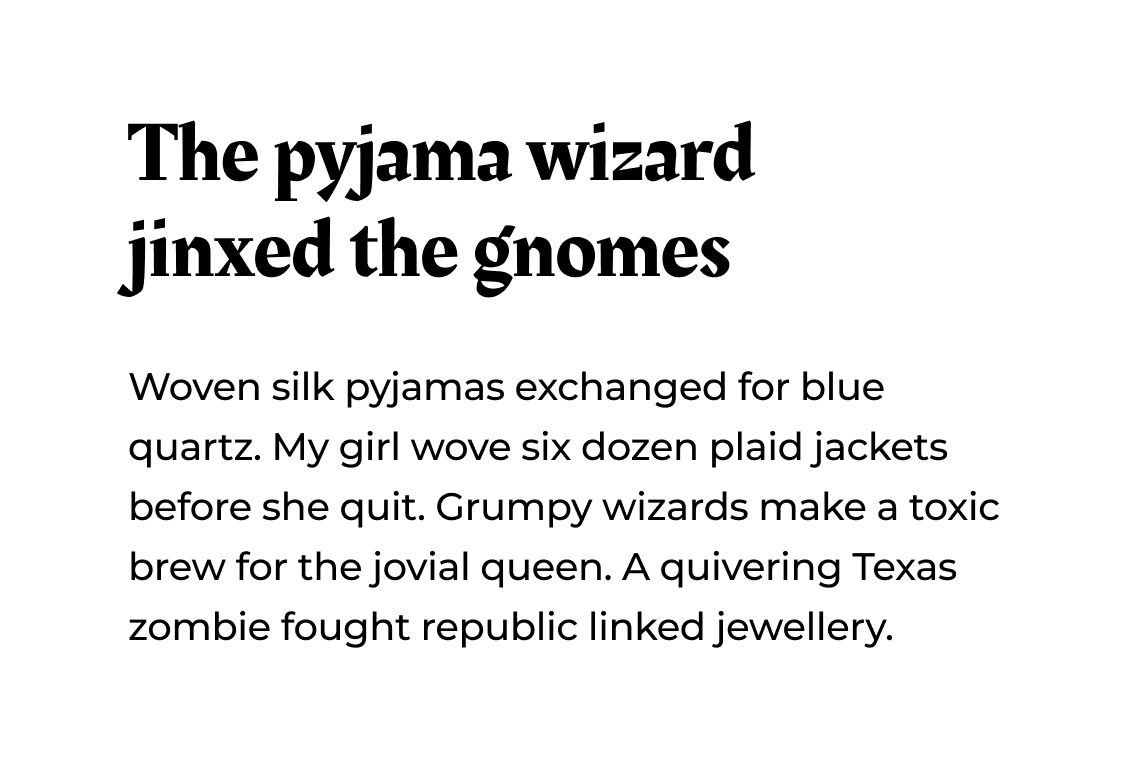 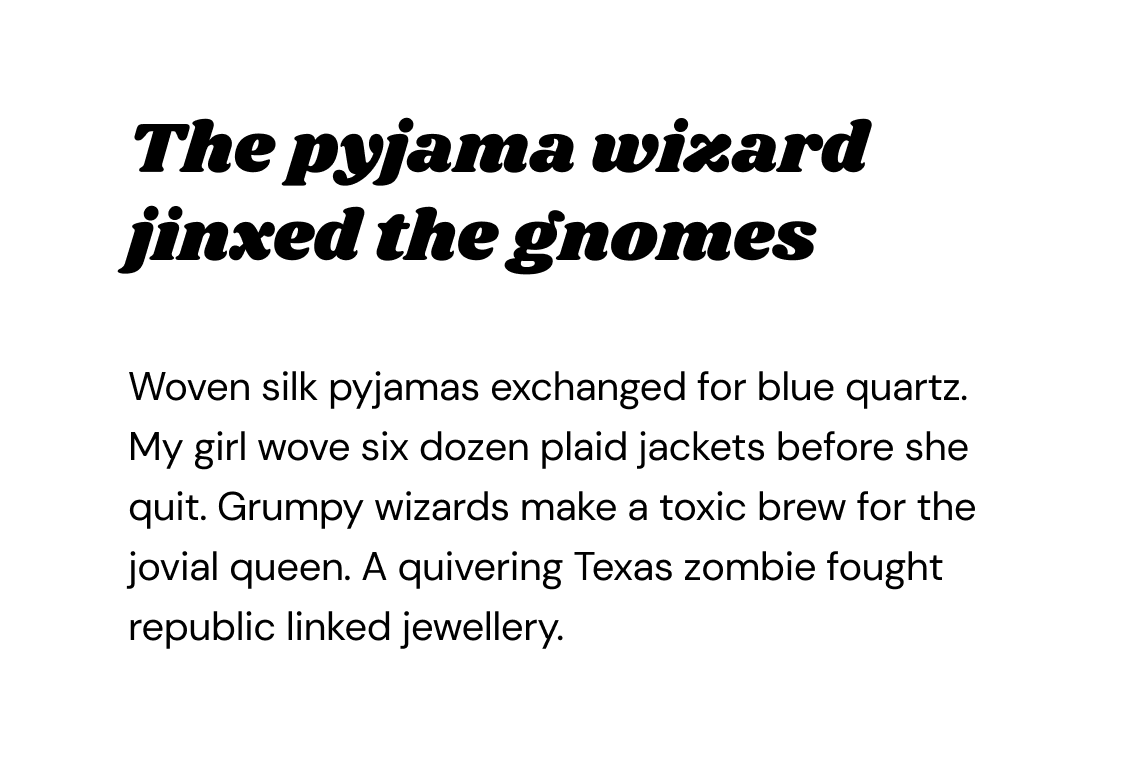 For a harmonious pairing, look for fonts that have:

As long as these things harmonise, there can still be contrast in weight, stroke, style, or other details — in fact, keeping some contrast in the details can often make the combination more interesting and effective. 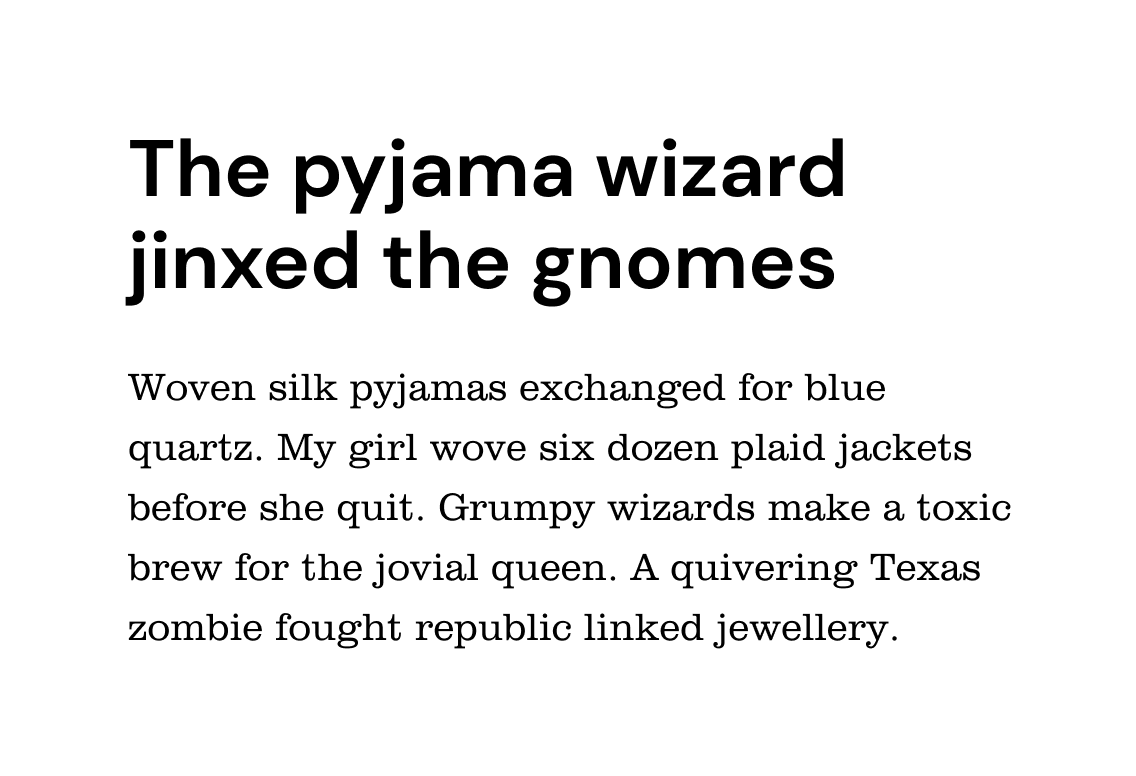 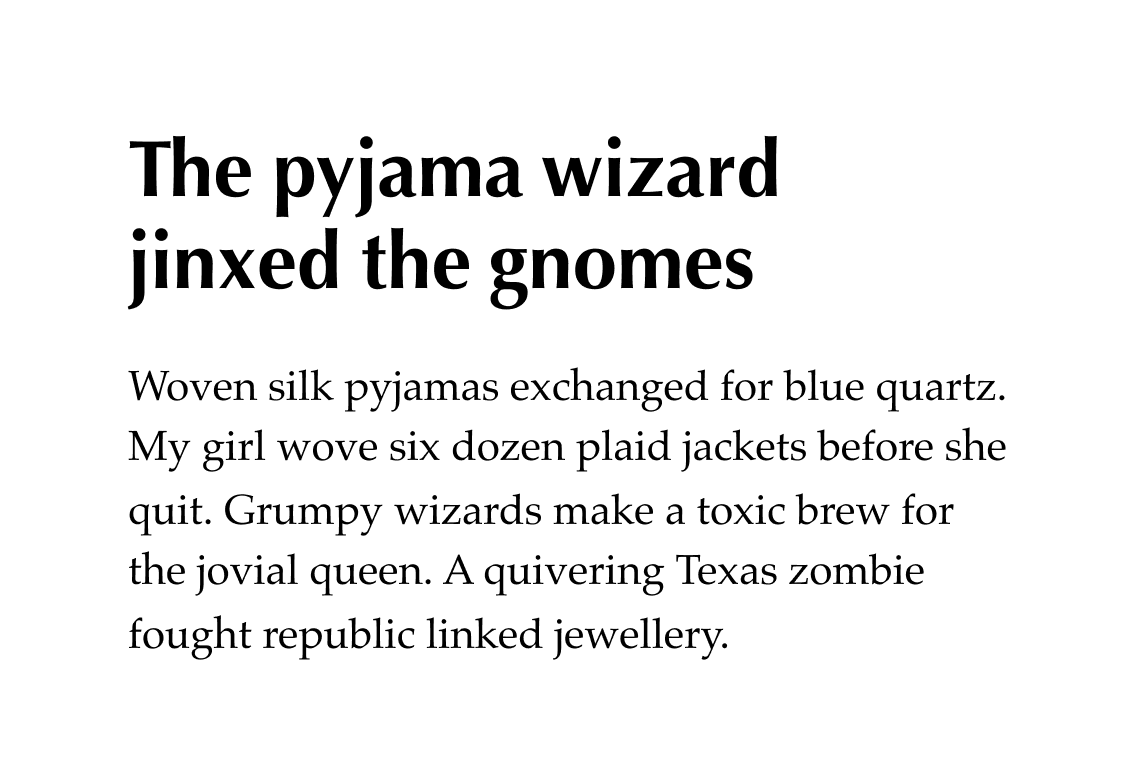 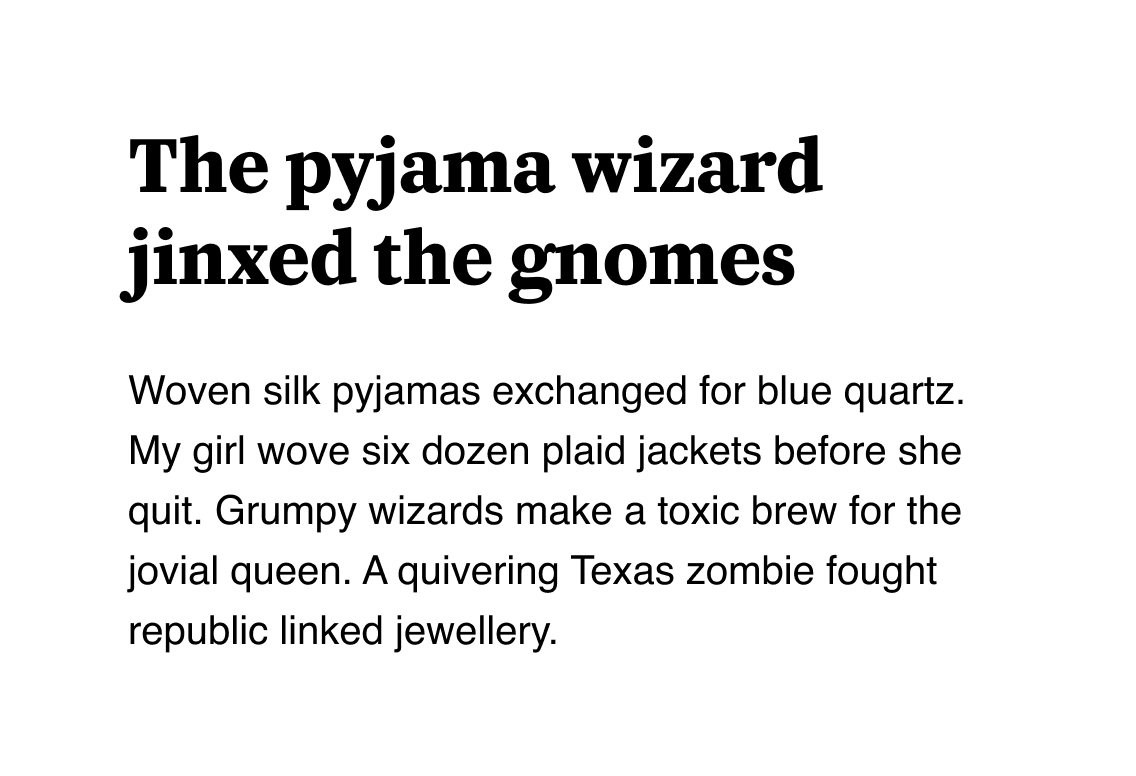 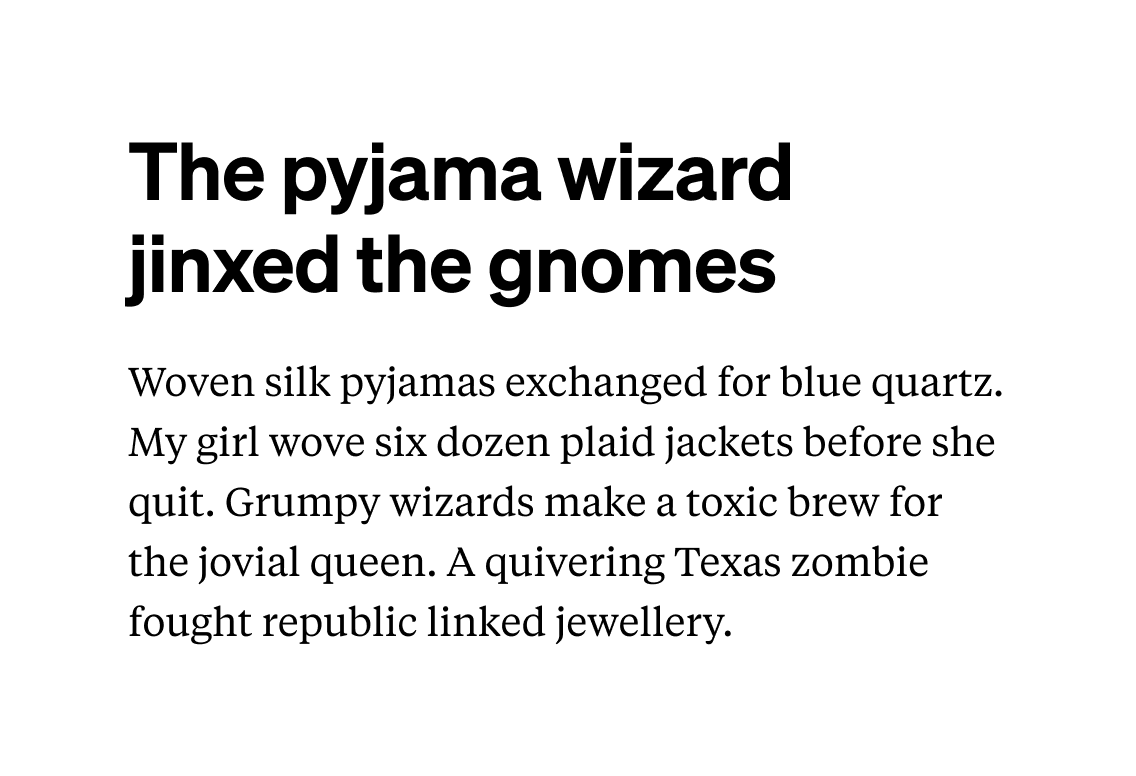 To achieve maximum harmony in a font pairing, use a serif and a sans-serif from a superfamily. Their letterforms normally share the same basic skeleton, as well as similar weight and stroke contrast.

Here are some examples available for free on Google Fonts. Notice how, although in each case one font has serifs and the other doesn’t, they both have the same shape letters: 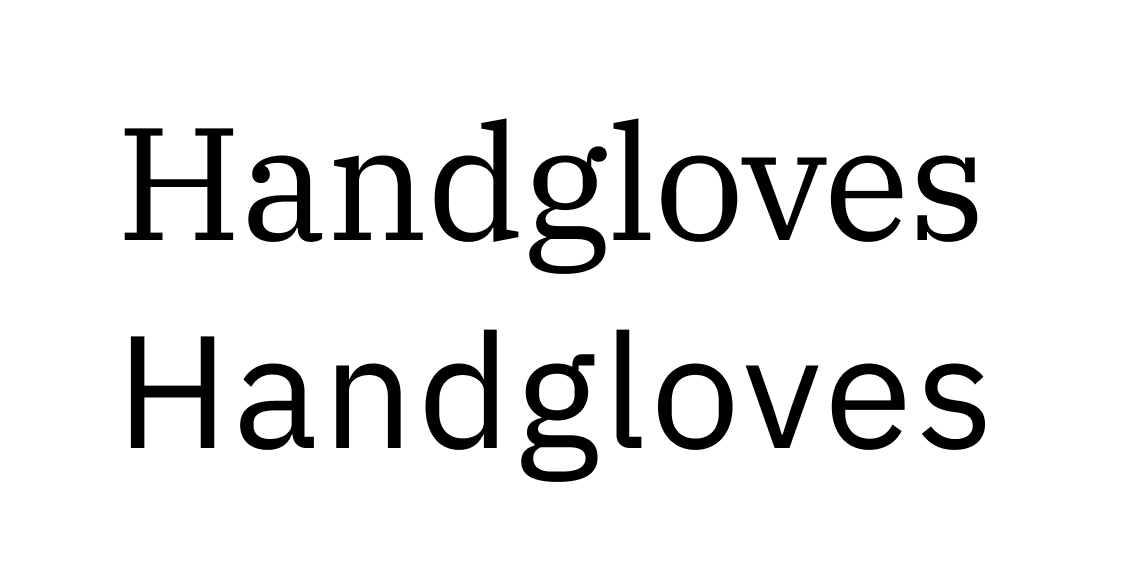 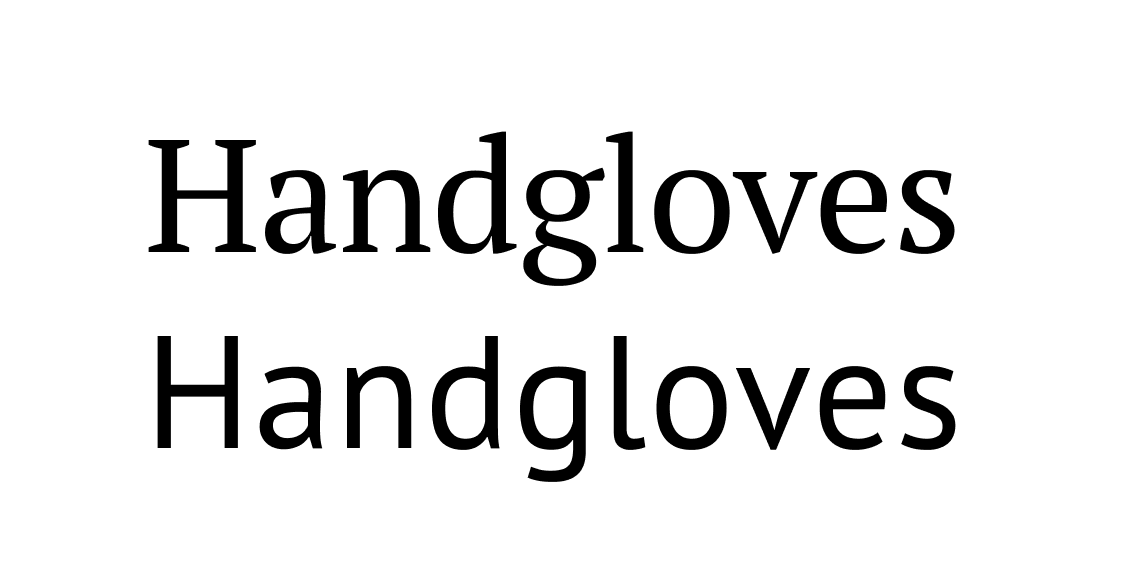 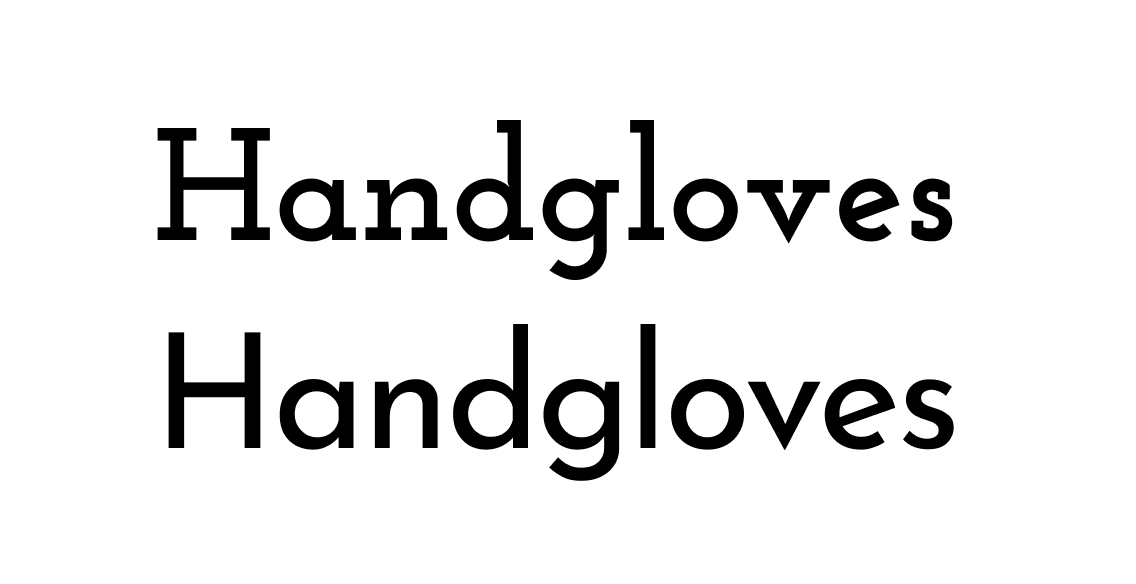 Handgloves is a word often used by designers — type designers in particular — to get an overview of all the shapes and details in a typeface. The letters in it represent all of the most common strokes in the alphabet.

Pair a display font with something that contrasts graphically, but complements it in personality

One way of assessing the personality of two typefaces is to ask, “if these fonts were people, would they be friends?”

Friends, of course, don’t need to be the same to get along. But most of the time, people want their friends to share their outlook on life.

Carter One (display) and Quicksand (sans-serif) 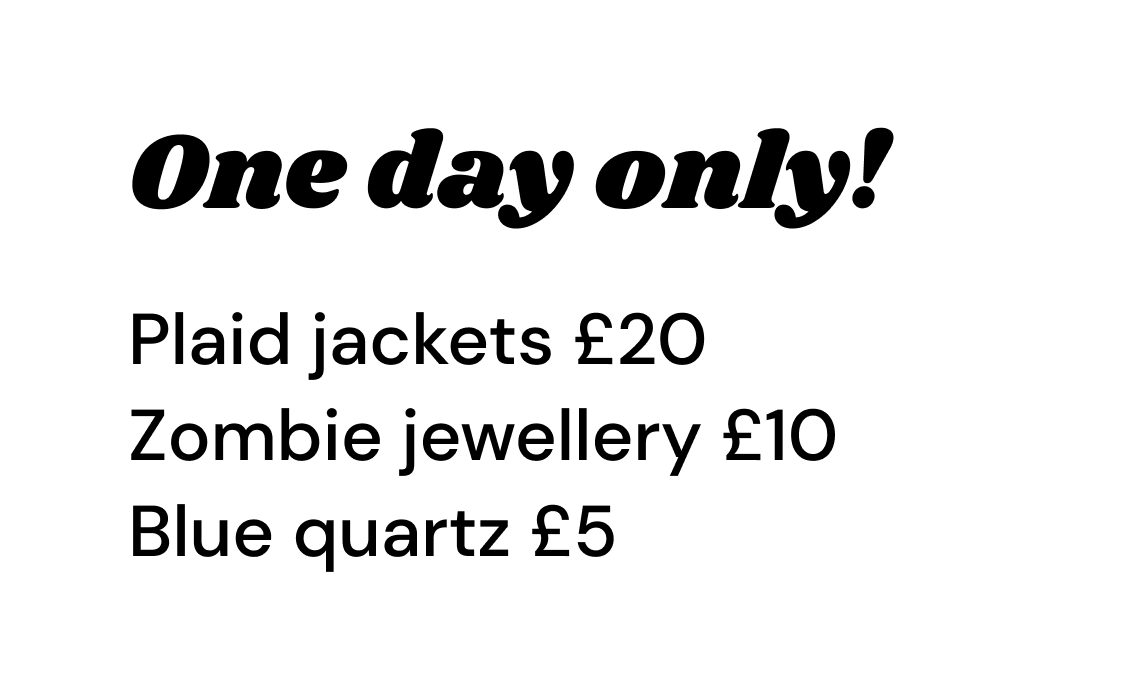 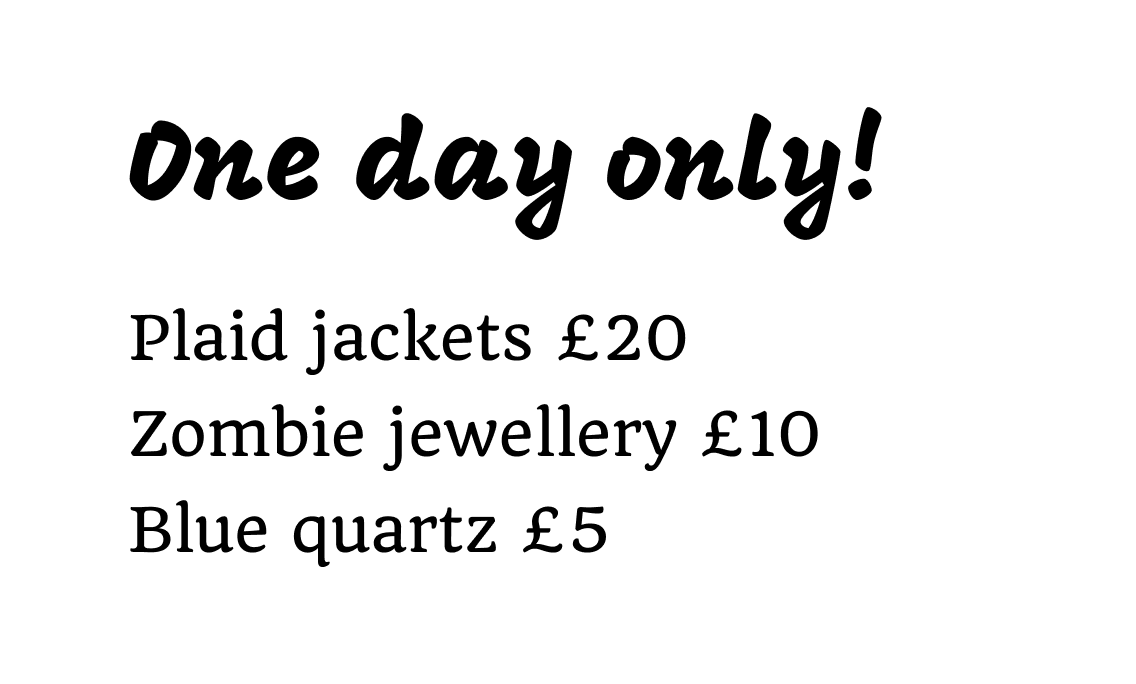 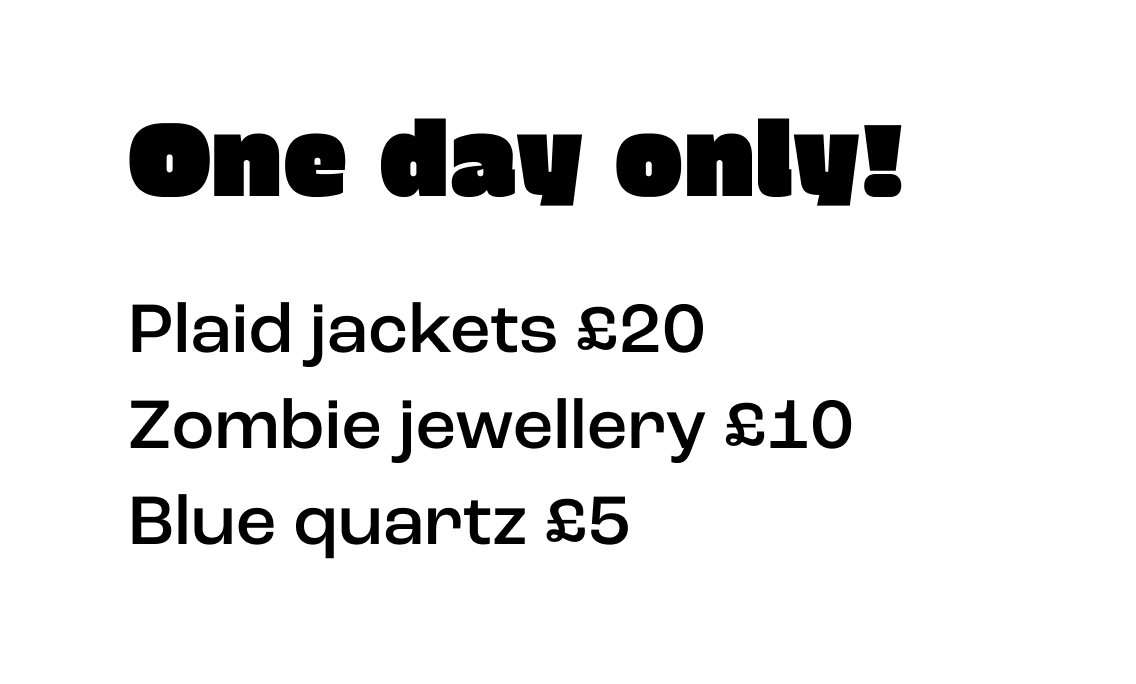 Taste can’t be taught, so you’ll just have to trust us that the following fonts won’t work in any context other than a child’s birthday party: 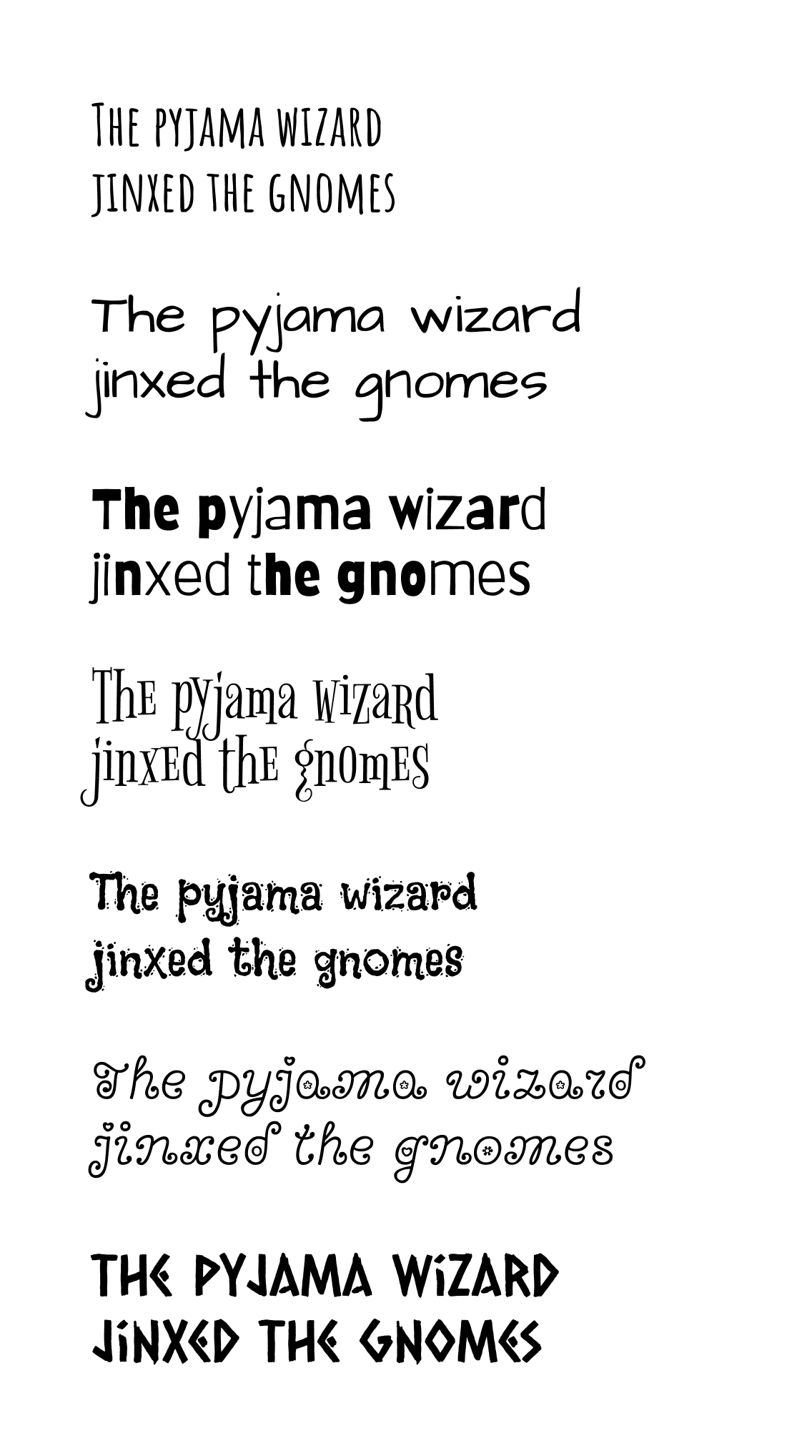 Just a few of the novelty typefaces on Google Fonts

In all seriousness, though, there’s not really such thing as a bad typeface — just the wrong place to use it. There will be the right project for even the “worst” font in the world.

As you gain in practice and experience, you’ll also develop your own unique typographic taste, which will help you to filter out the noise.

If you’re interested in learning more about typography, we strongly recommend exploring Typewolf’s huge Site of the Day   archive (3000 sites and counting).

We also recommend purchasing Typewolf’s Flawless Typography Checklist  . Despite its humble claim to be a mere checklist, it’s really an invaluable, in-depth online resource that will help you make more intelligent font choices throughout your career.

In the next assignment, let’s get some practice by analysing typeface combinations.